Julia Crouse: A Recipe for Success 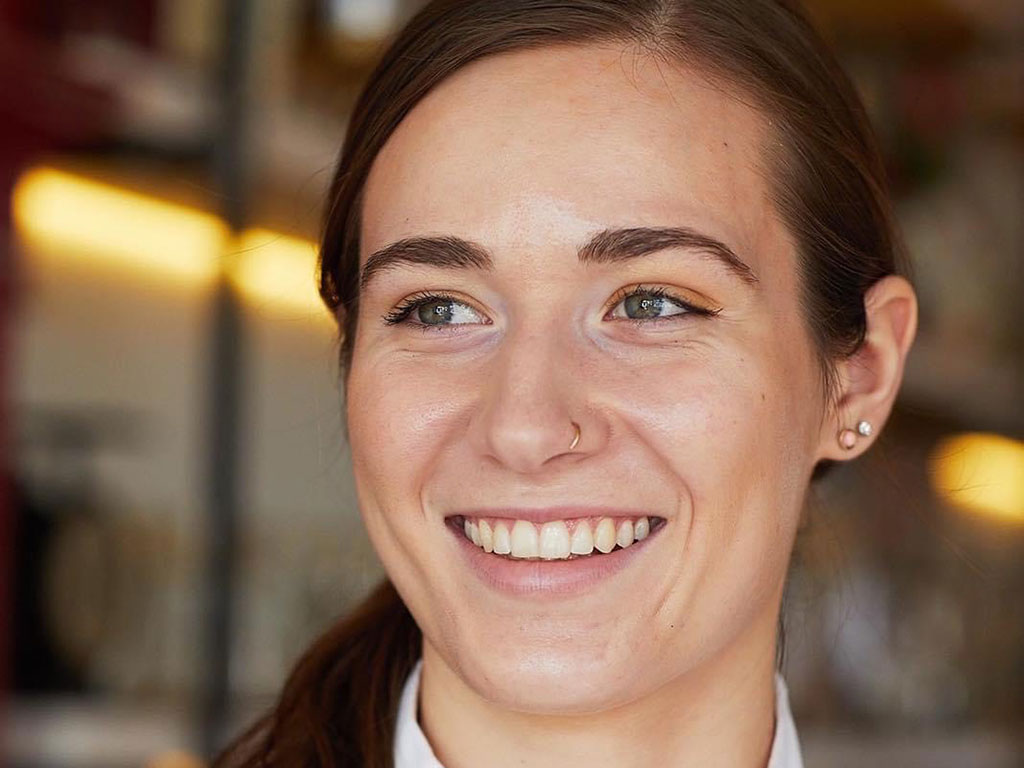 Julia Crouse was so impressed by the presentation Popoli Ristorante & Sullivan’s Bar’s general manager gave to her Kirkwood Community College culinary class, she emailed him. She was soon working as a line cook in the popular Cedar Rapids restaurant.

“The opportunity to make connections with people in the business was one thing that I loved about my experience at Kirkwood,” Julia said.

It was connection Julia was looking for when she enrolled at Kirkwood.

A graduate from Iowa City West high school, Julia initially attended a state university in the fall of 2015. She planned to study speech pathology, but general education requirements meant she couldn’t take any classes related to her major her first year. Feeling lost, she moved back to her parents’ home in Iowa City. The plan was to get a job as she considered her next move.

“I always loved baking as a child and it was something I wanted to learn more about,” she said.

Julia started working for Hoard’s Bakery in Riverside. While the bakery is no longer in business, Julia will never forget her time at family-owned venture. Rather than the theoretical lessons, she had hands-on, practical experience, losing herself in recipes for cinnamon rolls, cookies, and pies. As time passed, the work became more than a job.

She decided to lean into that feeling and go back to school to pursue her culinary arts degree.

Kirkwood was her first choice.

“I’d heard good things about the culinary program and knew a few people who went through it,” Julia said.

Kirkwood’s culinary arts curriculum is focused on real-world instruction. Hands-on training begins the first day, with students gaining practical experience in management, food preparation, and service. Field trips to various food service establishments and visits from area professionals making a living in the industry are a regular occurrence. In fact, when Julia began working at Popoli, the head chef at the time, Scott Sukovich, was a Kirkwood alum.

“Everyone I worked with in the kitchen during that time also was attending Kirkwood,” she said. “I was able to get to know my classmates while applying the techniques I learned in class.”

Julia remained a line cook at Popoli for one-and-a-half years before transitioning to sous chef. At the same time, she started working at Rodina, another popular Cedar Rapids eatery, on Sundays for extra experience.

Located in Cedar Rapids’ Czech Village, Rodina opened its doors in January 2019. Julia eventually transitioned from part-time help to training as the restaurant’s new sous chef. She turned in her apron at Popoli for the new position, but then Covid-19 happened, derailing her plans.

For eight months Rodina operated with minimal staff, including owners Chef Samuel Charles and Phoebe Charles, the bar manager, and Julia. The restaurant was able to stay afloat at a time when many businesses were shuttering, welcoming guests back to limited in-person dining in November 2020.

As sous chef, Julia is usually the first person at the restaurant, arriving around 12:30 p.m. to set up the kitchen. This includes turning on equipment, checking the counts of proteins and other ingredients, and receiving the food order, all of which can determine what will be on the menu that night.

Julia goes over the prep list she prepared the night before, dividing tasks between herself and the part-time cooks, ensuring that everything that needs to be finished before the restaurant opens is done. Once the doors open, Julia and Samuel, who also attended Kirkwood, are constant motion until they close around 10 p.m.

“I think some people have a negative connotation about community college, but I feel like I got a lot more out of my experience at Kirkwood than I would have at a four-year institution,” Julia said. “I really felt like our experience in the classroom would translate. Because of that, getting out in the real world after graduation wasn’t such a big deal. It felt right.”