By kirkwoodcommunitycollegeJune 6, 2022June 9th, 2022No Comments 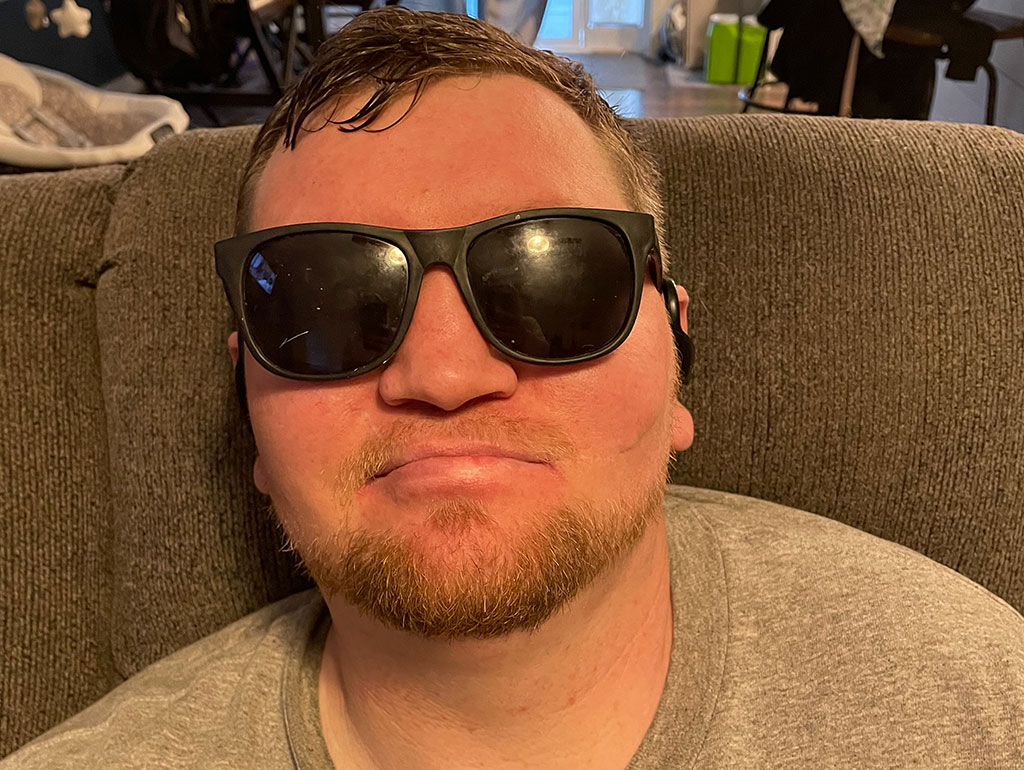 Sean Wiese does. He passed the HiSET.

There was a time when Sean, 32, thought he’d never get his degree. He dropped out of high school in 2008 and in the subsequent years, drifted from job to job. It wasn’t until an accident stole his sight that he envisioned his future – and it started with earning his diploma.

“I decided to try it and see what happens,” he says. “I never thought I’d come back blind and try it.”

Sean and others will celebrate this accomplishment during Kirkwood Community College’s High School Completion Program’s first in-person graduation since 2019. The event will take place at 7 p.m. on Thursday, June 9, at Hotel Kirkwood. Sean is among the group of students who share their story as part of the ceremony.

“The job I always wanted to have since I was six was work on cars,” Sean says. “That’s all I ever wanted to do.”

Sean was hired by B & B Automotive in Riverside in 2012, but three years would pass before he was allowed to touch a car. During that time, he kept the shop clean and learned by watching. Finally, in 2015, he was working as a mechanic. Things were finally falling into place.

“A year passed. I was working on something in the shop and the next thing I know, I’m waking up in the hospital,” Sean says.

Sean and his boss were involved in an accident involving an exploding tire. He doesn’t remember what happened, or how they got to the hospital. By the time he woke from his medically-induced coma, two weeks had passed. The bones in his left arm were shattered, his face was scarred, and his vision was gone.

“I thought my life was over,” Sean remembers. “Going blind was my greatest fear because of the things I loved to do. I rode motorcycles and did stunt riding. I loved driving. I was one of those weird people who would get in their car and just drive for hours.”

He was in the hospital for two months, during which healing and rehabilitation took all of his focus and energy. Once he was home, he had time to ponder his future.

“I decided I was going to try something,” Sean says. “I bought a car without an engine, tore it up, and put it back together.”

He did it by memory, imagining he was wearing a blindfold the entire time.

Sean started working on running cars, changing the spark plugs in his mother’s car, as well as the brake pads. Around this time he connected with a blind man in northern Iowa who worked on transmissions and semi-tractor trailers. He realized that what he was doing on his own had the potential to be what he did for the rest of his life, just like he wanted since he was a child.

But first he needed his high school diploma.

Sean began attending Kirkwood’s High School Completion Program in late 2019. He worked with the assistance of several scribes from Kirkwood’s Leaning Services Department. These individuals wrote his answers for him on worksheets and tests, but just like the automotive work he did in his driveway, he had to rely on memory and brain power. Most of his math work was calculated in his head. Covid-19 set his plans back slightly, as he struggled to retain information attending online classes. He took a short break, but was back in the classroom as soon as the campus reopened for in-person learning.

“I’m proud of myself for finishing, but if it wasn’t for the staff here, I probably wouldn’t have come back,” Sean says. “The teachers are a big part in my success. If I had had more teachers in high school like the ones I had at Kirkwood, I would’ve finished high school.”

Sean hopes to enroll in Kirkwood’s automotive program. He’s researching options, as he’ll need someone like his classroom scribes, only this person must have the mechanic knowledge necessary to keep him safe. Sean says won’t let this roadblock keep him from his ultimate goal: owning his own automotive shop.

“If there’s a will, there’s got to be a way,” he says. “I want to be an anomaly in the blind community. I want to be different; I want to go further. I want to say to people ‘I’m just like you even though I can’t see.’”